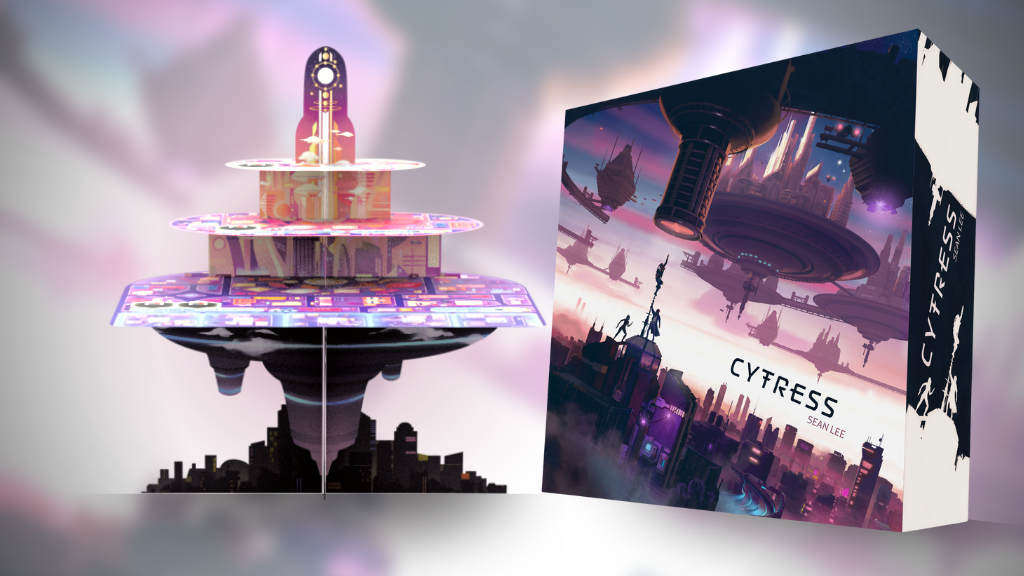 A competitive 1 to 5 player game set in a cyberpunk fortress ruled by elites in three-dimensional floating cities.

Latest Updates from Our Project:

We're down to the last week of the campaign! I'm extremely grateful for the love and support. We appreciate all of you including those who joined us from the beginning and those who just joined. Here is a summary of our journey so far:

It's amazing to see so many of you engaging in our challenges and coming up with unique ways to further your understanding of the themes. We can't wait to see more!

All components in Cytress have been designed with a beautiful & intuitive visual language that's easy to learn. To expand Cytress' availability, translations for the rulebook will be available digitally in these additional languages. French, German, Mandarin, Italian.

You played, we listened.  Thank you to everyone who has tried Cytress out in the last few days and provided us with such positive feedback.


Here are some of the most recent updates:


Please note: The design is not final and our graphic designer may tweak  the design slightly. We will keep you all updated on any changes!

Get Rewarded for sharing Cytress around!

Cytress  was created for individuals looking for a cyberpunk tableau building  game with RPG aspects and thematic immersion, and we want to give back  to those who've been with us from the start.

As a result,  we're providing a commission-based program that you can join to earn  rewards. I'm confident you'll be able to help us achieve greater  heights.

We can only accept a certain number of people, so don't share this with anyone else. Let's take Cytress to the next level.

So you've secured the coordinates, but they're as useless as dirt without a Netprowler (hacker). Though some of them can be found in the underbelly. Tricky is part is, they prefer to remain anonymous. However, part of the deal was to sell it on the black market to the highest bidder, of course the privateer promises that you’ll be paid handsomely, the 20% that was agreed...

This gritty privateer for the Hikaro Enhancement Tech has again contacted you and explained that she needs someone who’s capable of tracking and securing a buyer for the coordinates, namely a Netprowler. According to her, one was last seen in Downtown Underbelly. The privateer offered that you can name whatever item or people you need for the job and they’ll provide it for you. She wants you to secure this deal at all costs. If the deal doesn't go through, you are expected return to her with the Netprowler’s finger or eye, the privateer will pay you double.


Option A: Accept the mission and travel to the underbelly to secure the deal. Also, take the Netprowler down at your own discretion.

Option B: Track and find Gehafar, the Netprowler. Instead of killing him, you let him go and tell him about the privateers’ plan. Convince him that you’ll get back to the her if he promises to decipher the coordinates for you—access points that would get you into Stratos.


Today we'll doing a QnA with one of our team members here at Cytress. We'll be having a chat with my marketing wiz on how we met and what got her into this cyberpunk fortress!

Thanks for coming on Dina!


There is no turning back now. Getting rid of a high-ranking hooliganger placed a target on your back. The hooligangs are on high alert, with tighter security around their warehouses, they've doubled their forces and have their eyes at the gates 24/7. Things will get harder from here with the hooligangs.


After the previous job you just pulled, you received an anonymous call from another corpocrat agent. She wants you to take out a high-ranking corpocrat rival. She pays you half upfront and sends you his Grid coordinates, which is an open-neural line connected to his workplace.


Today I would like to hold a ceremony for the influencers who've been part of the Cytress journey. I'd like to say that we only decided to have 5 categories to start with, so if your video isn't here, you may still have a chance in the future! Now I'll proceed by give a shoutout to these influencers for the categories down below!


Most Played goes too...

Congratulations on being the winners for each of these categories.


Your journey with Lofty continues...


Previously, you conducted Mind Travel for a Hooliganger. But ended up double-crossing him by wiping off the dead staff’s inactive neural database platform.  You proceeded to sell the info on the black market or a corpocrat, Caldersson TransComm Inc.


Grady, the corpo agent from Caldersson TransComm seems skeptical about your info. But knowing your background and vast connection, he gives you a chance to prove your innocence by doing his work for him. He wants you to find out anyone who’s actually behind the hooligangs illegal activity and put an end to it once and for all.


Today I'll be giving you a double update... What?! Yes we'll start with a solo mode rules explanation which so many of you have requested. And a breakdown on what those add-on packs are all about!

Explanation of the Add-On Packs

Now, it's time to continue our journey...

You picked Option B: Dig deeper into the case. Then send an anonymous call to TacRes Enforcers that an agent of Triatechtrica was dealing drugs with a  group of hooligangs in the Zerdina district. But now that things went  sour, this corpo agent is trying to hire assassins like you to clean his  mess.


Turns out that corpo agent wasn't involved in the deal and the hooligangs have been selling their products illegally on the streets.  The agent from Triatechtrica has tipped you off to other corpocrats that you were involved in aiding the hooligangs.


Someone who knows you—one of your connections, you presume—in the fortress mentioned  your name to this hooligang who’s looking for an experienced mind-traveler (MT)—or one who could perform deep neural immersion recovery, or NIR, without a problem. One of the staff at HGG Tech Advancements has been killed. He wants you to retrieve vital data which only the dead staff knew. After persuading him, you learn that they’re delicate hardware info about the corpo’s newest vehicular advanced weapons systems, the Viper Scourge EMP system. He simply wants you to meet and proceed with him in a shady morgue in downtown where the body is kept and conduct the Mind Traveling.


I'm just grabbing a cup of joe, and am excited to see share that we finally have a FAQ section now!

So please check it out if you have any questions!


But now that that's out of the way let's get to the main event, the one we're all excited for! :)


In the last update, we started playing a game & the majority of you chose... Lofty!

Hence you will now collectively be playing as Lofty, and so our story continues...


Despite her being a part of the Seraphs, Xandra, the Divinity’s leader, never questioned her loyalty as she’s always been around whenever needed. When asked which group is more important to her, Oona’s response was simply: ‘What’s the difference? We lie, steal, and kill...’


A corpo agent hires you to deal justice to a group of hooligangers who stole several boxes of high-quality, military-grade stim drugs from Triatechtrica Pharmaceuticals. According to the agent, the substances have been shipped off one of the hooligang settlements in the Zerdina district. Whatever spoil you find, it’s yours to keep. But you instantly sense that something’s off...